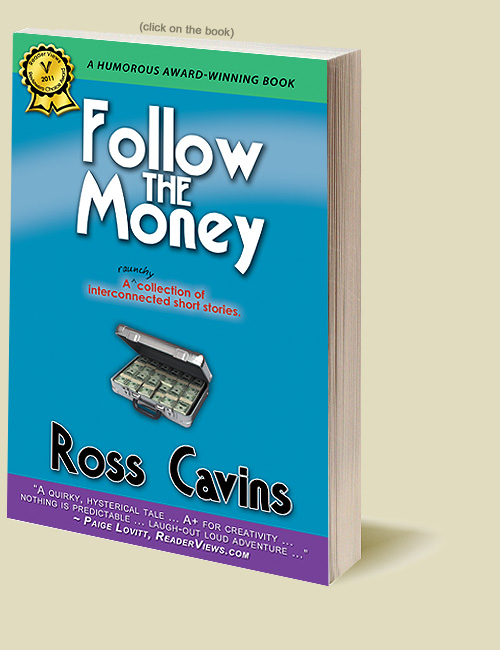 Stick Elmore Leonard, Carl Hiaasen and Christopher Moore in a room full of whiskey and tell them they can't come out until they've written a book together.

"This book is among the funniest I have ever read . . . bigger than life characters . . . innovative plot lines . . . savor each story slowly."

"Follow the Money reads like an Elmore Leonard novel set in NASCAR country ... a rude, crude, totally enjoyable look at what we'd do for money."

From one of America's most unknown authors comes a book so humorous, so vile, so inane . . . it could only be a cry for help.

If you're searching for a refreshing style that's a tad demented, with characters that burrow deep into your mind and never leave, you've found the right book.

"Follow the Money" is a collection of ten interconnected short stories that will grab you, wrestle you to the ground and squeeze you until your funny bone snaps in two.

A botched kidnapping, a money scam, a not-so-average convenience store holdup ... each story flows (with the money) through a series of interesting, and sometimes bizarre, plots. Layered and interweaved with seamless complexity, recurring characters and everyday motifs bind the ten stories into a single universal plot.

Ingenious in its conception, flawless in its execution, "Follow the Money" is a hilarious, detailed study on the many facets of the human condition. Greed, Pride, Lust . . . the seven deadly sins have never been so entertaining.

Prepare yourself for a raunchy, gritty ride you'll never want to end.

Ross Cavins graduated with a BS in Computer Science from UNC Greensboro and currently works as a freelance website designer and internet programmer and lives in the North Carolina Piedmont.

Two divorces and a mid-life crisis pushed him to pursue his life-long dream of writing a book. This is as close as it gets for now. His primary goal is to one day visit a bookstore and hear, "Hey, is this you?" instead of, "Hey, you gonna pay for that?"

You can find him at his blog: RossCavins.com

THE GIRL WAS in the back room, asleep. Clint and Waylon sat in the kitchen, drinking beers at the little table Clint picked up at Goodwill last year for five bucks.

"Where we doin' it?" Waylon asked.

"I don't know yet." Clint scraped at the label from his Budweiser. He heard somewhere it gave you luck if you got it all the way off without tearing it. There had to be a trick to it. He'd figure it out, pull it off in one piece.

"I thought you had it all planned out."

"I do, just not all the little details."

"Little details? Where we do it is like one of the big details, ain't it?" Waylon turned up his beer, taking three big swigs one right after another.

"Hey!" came a muffled voice from the back room.

Clint took a drink from his beer. He looked at the label, half off now and not a tear yet, thinking that was a good sign.

"Hey!" The girl screamed again through the closed door. Waylon glanced at his younger brother, waiting for him to do something. Clint sat there in his chair, leaning back studying the label on his beer bottle like it was a winning lottery ticket and he just had to scratch the right boxes to win. The girl yelled again for somebody to come there.

"You gonna see what she wants?" Waylon finally said, fidgeting in his chair like a two year old that's got to go to the bathroom. Do number one.

Clint shrugged, keeping his eyes on his beer bottle. It was sweating pretty good now, making it easier to peel the label off but also making it just as easy to tear. "You go see what she wants."

"HOW ABOUT THAT ONE?" Junior said, sniffing his nose and jerking his head around, nodding toward a champagne-colored Honda Accord.

"Nah," Calvin said, walking beside him, looking around the parking lot coolly, keeping his hands in his pockets, his cap pulled low on his head. "I want an American one. They're easier."

Calvin stopped and looked at Junior. "That's a Mercedes. I said American."

"But it's my favorite color."

Calvin closed his eyes and pinched the bridge of his nose, saying, "Junior, the color don't matter. What does matter is I can get in and hot-wire the damn thing. I don't like messin' with no foreign cars, only American. They're easier. Got it?"

"Yeah, yeah, sure Calvin. Whatever you say." Junior sniffed and scraped something out of his eye, jerking his head around to see what was behind him, then looked at Calvin. "Hey man, lemme have just a little bit, just a little." Holding his thumb and finger up about an inch apart.

"No. How many times I gotta tell you? I need you thinkin' straight. You get any of that stuff in you and you ain't for nothin'."

"Yeah, I know, man, it's just that"-looking around the parking lot like he was searching for snipers-"a little bit will like, smooth me out. Ya know?"

Calvin blinked once, keeping a straight face, and held back the urge to backhand his friend one good time like he'd seen DeNiro do in the movies. "No, once we done the job and split the money up, you can have some. Not till then."

They walked through the Olive Garden parking lot all the way to the far end before they found what they were looking for.

"It's not red. It's like a maroon or burgundy or maybe one of them new colors, like cinnamon or something."

Calvin cocked his head to the side and squinted at Junior. He kept his lips tight and said nothing, let the silence speak for itself. Junior peered down at his feet and shuffled them around. He sucked in his top lip and bit it, waiting for Calvin to stop looking at him like that.

Calvin walked over to the car.

Five seconds; that's all it took for Calvin to pop the lock. Fifteen more and he had it started, some Amy Grant crap coming out of the speakers. Junior sat there with his mouth open, watching Calvin do his thing when he should have been watching for the owners coming out of the restaurant.

"NINE-ONE-ONE, what is your emergency?" the voice on the other end of the phone said, a raspy voice that seemed to be somewhere between cigarettes number nineteen and twenty for the day, a husky female voice that lost its femininity about two grandkids ago, a voice that was firm and authoritative and none too happy to take an emergency call.

"Uh," Richard said into his phone, "you got any men operators?"

"Sir, what is your emergency?"

"Well, you see, it's kinda personal. You ain't got no boss I can talk to?" Richard fidgeted on the couch, just wearing a pair of athletic shorts and his lucky Carolina hat with the N over top the C like it was one letter. He was stretched out from armrest to armrest cause it hurt less when he laid like that.

"Mr. Ferguson, what is the nature of your emergency?" the operator repeated herself, her voice steady and unemotional, like she could have been one of them computerized voices that tell you to press one if the problem is for the police, two for the fire department, three for an ambulance.

"You ain't got nobody else I can talk to? Nobody that's, you know, a guy? You see, the thing is-"

"Sir, Mr. Ferguson, the sooner you tell me the nature of your problem, the sooner I can send someone out to help you." She paused. "Are you currently located at 5602 Staley Farm Road?"

"Yeah," he answered, wondering how the hell this woman knew where he lived cause he sure as hell didn't remember telling her.

"Good, sir, now please tell me what your emergency is."

Richard thought about it a second, drawing up his courage, finally giving in cause he was hurting pretty bad. "Alright, first you gotta promise not to laugh."

"One of those gems that I'd never find on my own ... great sense of plot and dialog ... influences of Carl Hiaasen ... unexpected plot twists ... a pleasure to read." Thomas Duff Amazon Top 100 Reviewer, Vine Voice

"Follow the Money reads like an Elmore Leonard novel set in NASCAR country ... It's a rude, crude, totally enjoyable look at what we'd do for money ... I enthusiastically recommend it to fans of Elmore Leonard, Cops and peopleofwalmart(dot)com." Justin Gaines Amazon Top 100 Reviewer and Vine Voice

"This book is among the funniest I have ever read ... the humor sort of sneaks up on you, and leaves you laughing out loud and gasping for breath ... I marveled at the bigger than life characters ... innovative plot lines … savor each story slowly ... what a ride!" Lauri Coates ReviewTheBook.com

"Presenting an overlying narrative throughout these stories, his thoughts on the world will entertain as well as introduce his own special brand of philosophy. Follow the Money is a piece of humor well worth seeking for short fiction fans. " Willis Buhle Midwest Book Review

"This book was hilarious, right from the dedication through to the end ... characters are very well developed ... I think I'm going to have to read this a few times." Jennifer D. Avid Reader

"A curious book ... that I couldn't put down ... superbly entertaining ... unusual for its quirky cleverness ... deserving of 5 stars in a landscape of otherwise so-so literary offerings ... pure FUN." Joseph Haschka Amazon Top 500 Reviewer and Vine Voice

"Follow the Money is sexy, witty, profane, sly and very, very funny ... It's a very, very good read! I can't wait to see what Cavins comes up with next." Michael Meredith Amazon Top 500 Reviewer and Vine Voice

"It's a page turner ... laughed out loud several times ... gold star for creativity ... I literally had a huge grin on my face when I finished the final chapter." Stephanie Snowe author of "Meeting Mr. Wrong"

"A quirky, hysterical tale ... A+ for creativity ... nothing is predictable ... laugh-out loud adventure ..." Paige Lovitt ReaderViews.com

"A unique read ... off-the-wall and a little on the wacky side ... a humorous writer and you will enjoy his book ..." Charline Ratcliff RebeccasReads.com

"This book was so surprising ... it blew me away! I absolutely LOVED this book! A cast of the most misfit characters I've ever met ... Highly recommended." Kathy Austin Avid Reader

"It must be one of the most difficult feats for an author to write humor, and Cavins succeeds ... quite creative ... effectively develops characters in a few strokes ... you will be laughing at this book." Craig Stephans Amazon Top 1000 Reviewer and Vine Voice

"A remarkable job of weaving all ten of these stories together ... packed with bits of Southern culture, wry observations on life, and some genuinely funny moments." Daimion B. TheWordZombie.com

"A rollicking collection of short stories ... rapier wit and a sardonic sense of the ironic ... I laughed out loud ... this is a fun read." Al Chase Amazon Vine Voice

"One of the most creative books of short stories that I have ever read. All the stories are imaginative, resourceful, witty and creative ... couldn't put the book down ... I can't wait for his next book." Angela Taylor Avid Reader